Miche Pest Control is a top rated, family owned and operated, full service pest control company that provides exterminating services for spiders in Washington DC, Maryland & Northern Virginia. Our expert technicians get rid of spiders fast, and use preventative methods to keep spiders from coming back after they've been eliminated. Miche Pest Control has a 4.9 star rating and over 1,000 reviews online - click the button below to get started, or give us a call today!

Spiders are common pests that primarily live in yards, but can also find their way into homes. All spiders are arachnids and have eight legs, two body regions, and no antennae or wings. When living outside in nature and away from people, spiders are extremely beneficial. Spiders are predators, and hunt and feed on nuisance insects and other garden pests. When spiders decide to live near or inside your home or business, they can become quite a nuisance and some species pose a potential danger to you and your family. 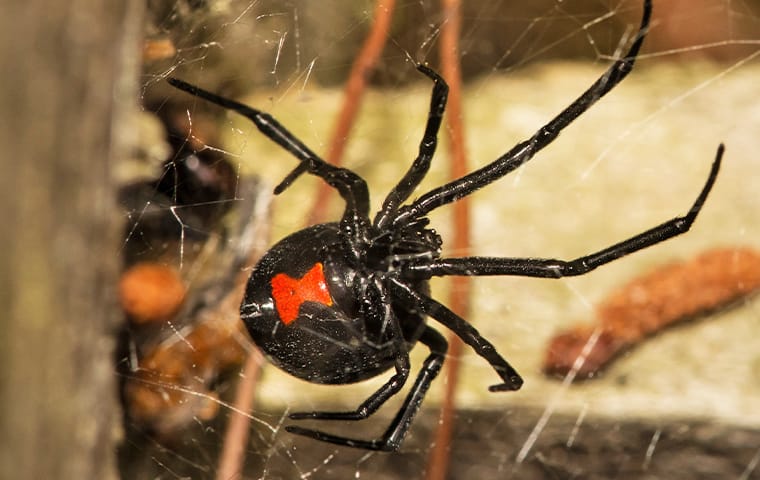 Black widow spiders are fairly easy to identify. They have round bodies that are shiny and black in color. They also have a distinctive red hourglass-shaped mark on the underside of their abdomens. Additionally, these spiders may also have light red or white markings on their abdomens and backs. Black widow spiders are found living throughout most of the United States but are much more common in southern states where temperatures are warm throughout much of the year. In our area, they are more common in Northern Virginia than in Maryland or Washington DC.

Grass spiders are a medium sized type of funnel weaver spider, common throughout the Mid-Atlantic. They have two dark bands straddling a tan midline going down their cephalothorax. Grass spiders are often mistaken for wolf spiders, since they have a similar color pattern, but the lines on a grass spider aren't as thick or as dramatic as on a wolf spider. The pattern on a grass spider's abdomen begins with an extension of the dark lines from the cephalothorax, but is mostly covered by a series of chevrons.

Jumping spiders can be found throughout DC, Maryland, and Northern Virginia. Because jumping spiders are the largest family of spiders, they range widely in color and size, but they are generally smaller to medium sized, getting up to a maximum of about 1 inch in length. Although they normally move fairly slowly and unobtrusively, most species of jumping spiders are capable of very agile jumps, especially when hunting, but they might also jump when fleeing predators and other threats, or to cross a long gap.

Wolf spiders are dark brown in color with pale, yellow stripes or other markings, and their robust bodies and powerful legs are covered in hair. Wolf spiders are not web-building spiders; instead, they create burrows in the ground or under dense vegetation, rock piles, or woodpiles. Wolf spiders use their longs legs to run quickly and hunt down their prey.

Wolf spiders are a species of spider that is not dangerous to people. They are considered to be only a nuisance pest. Bites from wolf spiders are rare, and their venom is not strong enough to cause problems for people. Wolf spiders move in a fast, unpredictable manner and their appearance makes them startling pests for people to encounter.

Why do I have a spider problem?

Spiders are reclusive pests and prefer to stay hidden away from people. They are often attracted to properties that offer them food or shelter. Areas like dense vegetation, rock piles, tall grass, woodpiles, and underneath decks provide excellent places for spiders to hide away from people and predators. Spiders feed on insects; if there are high numbers of insects living in or around your property, you will most likely experience problems with spiders at some point.

Where will I find spiders?

Spiders are usually found living and hunting for food outside, but they do find their way into businesses, homes, barns, garages, and sheds while out hunting for prey or if the weather conditions outside become too harsh. Outdoors, wolf spiders live under firewood, stones, and landscape timbers. Inside, they tend to stay close to ground level, moving along walls and hiding under furniture. Black widow spiders are most often found living outside around woodpiles and under roof eaves. Once inside your home or business, they hide in dark, out-of-the-way places like firewood, closets, boxes, and firewood.

How do I get rid of spiders?

If spiders have become a problem in your home or on your property, it is best to seek the help of a pest control professional. When you partner with the licensed experts here at Miche Pest Control, you will have the peace of mind to know that your entire spider infestation will be eliminated. Our friendly, highly trained professionals use effective and modern pest control methods and products to control spiders and other common household pests living in and around your home or business. To learn more about our exceptional spider control services performed throughout our service areas in Virginia, Maryland, and Washington, D.C., contact Miche Pest Control today!

How can I prevent spiders in the future?

Preventing problems with spiders is difficult, but we want to help you guard your property from spiders by offering these helpful prevention tips: