Pavement ants are commonly found invading commercial properties in DC, Maryland, and Virginia, though they can also be found invading residential properties as well. They are a common pest in the continental United States. The pavement ant derives its name from its habit of nesting beside and underneath sidewalks, driveways, and foundations. New colonies of pavement ants are established after mating flights that usually take place in the late spring and early summer, but these mating flights can take place during other times of the year if the ants are nesting indoors. The alates typically emerge from under baseboards, expansion joints, or from floor registers connected to heating ducts. In commercial buildings, they often become a nuisance when the alates emerge from openings in walls above false ceilings, then drop into the rooms below. This activity can go on for weeks as more alates emerge from their nest.

Nests are located in soil in the open, or under stones and pavement, as well as in masonry or rotting wood. Pavement ants usually leave conspicuous piles of excavated soil. During winter, they will move inside, preferably to be near a heat source such as a radiator or heating duct. Nests usually occur at ground level, and workers use pipes or wires to move upward. Pavement ant workers are more active at night. They tend homopterans for honeydew, especially subterranean homopterans like root aphids, and pavement ants will feed on both live and dead insects, as well as a variety of plants. As household pests, they are attracted to both greasy and sweet foods. Large masses of neighboring colonies are often observed fighting, presumably to defend or increase territory. Larger territories lead to increased nutritional status, and thus larger workers and more reproductives.

Pavement ant workers are monomorphic, 2.5 to 3 mm long, and their body color varies from light to dark brown and blackish. They have a two-segmented pedicel, and a stinger. Their antennae are 12-segmented with a 3-segmented club at the end. The propodeum has a pair of small spines, and the head and thorax of a pavement ant has numerous parallel grooves. Queen pavement ants are similar in appearance, though larger (6 mm). Pavement ants move relatively slowly. 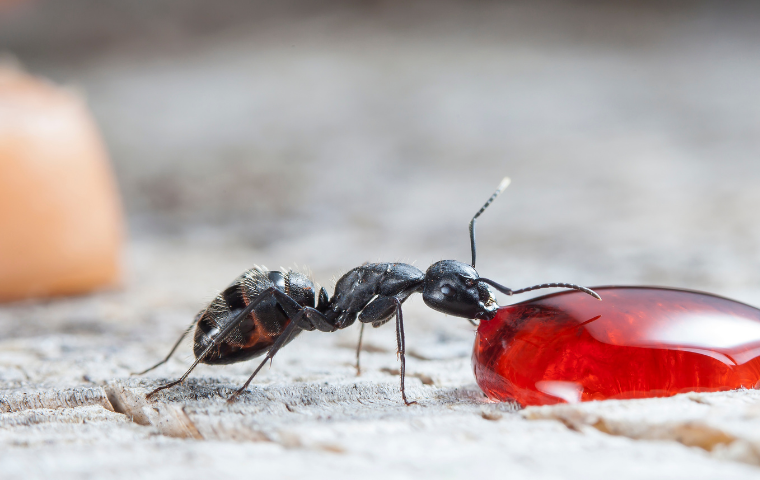