Black Widow Spiders can be found throughout the greater Washington DC & Baltimore areas, including DC, Maryland, and Northern Virginia.

Widow spiders (genus Latrodectus) are known worldwide for their ability to cause pain and suffering in people. Most species have a strikingly beautiful color combination of a shiny black body with bright red markings. These distinct markings increase the apprehension many people have for these spiders. The red markings often involve an hourglass on the underside of the abdomen. The two types of black widow spiders that are most commonly associated with homes and businesses in the greater DC & Baltimore areas are the southern black widow, and the western black widow. Both of these spiders are shiny black with a ventral red hourglass on the abdomen; they can be differentiated because the southern black widow has an additional red dot just above the spinnerets. These two species cause most of the widow envenomations (black widow spider bites) in North America. 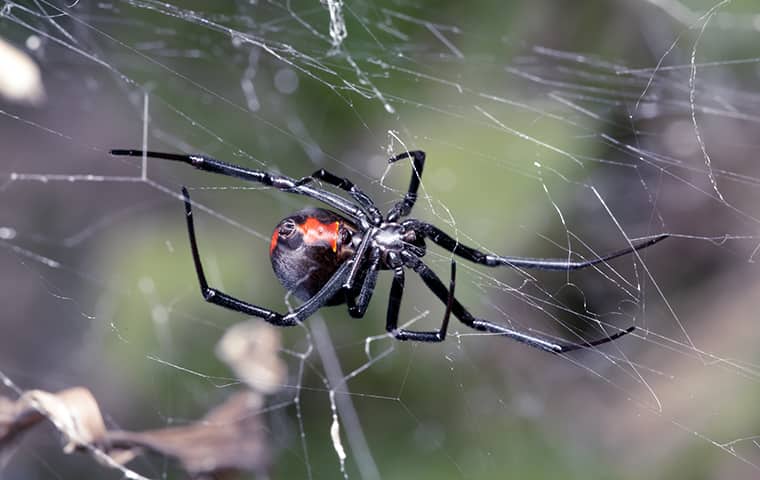 Black widow spiders produce about 300 eggs per egg sac, and can store sperm from the original mating. This means that they can produce more than 10 egg sacs over many months, without any reduction in egg number or viability. Black widow spiderlings stay with their mother for a short period of time after they emerge from their silky egg sac, then will often disperse by "ballooning." In areas where black widows are dense, new baby spiders are regularly produced during the warm months and later disperse. Black widow spiders are one of the first new colonizers of disturbed landscapes, such as new housing developments.

Black Widow Spiders produce a venom that affects the nervous system of the things that they bite (neurotoxin). The bite of a widow spider is typically felt as a pinprick, if at all. Within an hour or so, symptoms develop which include severe pain, localized sweating (possibly only the bitten limb will sweat), reduction or cessation of urine output, and rigid abdominal muscles. The severe pain may mimic appendicitis, and has been misdiagnosed as such. Bite victims are active and agitated and move incessantly to minimize pain. The bite site may appear as an inconsequential red mark; envenomation manifestations develop systemically throughout the body and distant from the bite site.

The symptoms caused by bites from black widow spiders can be readily vanquished with antivenin. Because antivenin is based on horse serum, allergic reactions can occur. The severity of a person's reaction to the bite of a black widow spider will often depend on the their age, as well as their physical condition. Children and the elderly are the most at risk for the more severe of the symptoms mentioned above, and are typically more seriously affected than young adults and middle-aged people. In milder cases, which are described as similar to a bad flu episode, symptoms dissipate over a few days with general supportive care.

What Should You Do If A Black Widow Spider Bites You?

How To Get Rid Of Black Widow Spiders