The German Cockroach is a cosmopolitan pest, occurring on all continents except Antarctica. German Cockroaches can be present in all sorts of homes and businesses. In areas with severe cold, they typically only survive close to buildings, but in Northern Virginia, DC, and Maryland, especially during the summer months, they can be found outside as well. Though it is nocturnal, the German Cockroach will sometimes be visible during the day. This is most common when the population of cockroaches is getting over-crowded, or if the population has been disturbed. When excited or frightened, these cockroaches emit a distinct odor. Generally, sightings of German Cockroaches are most frequent in the evening, or when someone suddenly turns on the lights in the kitchen at night.

Cockroaches are hitchhikers. They frequently invade the home by catching a ride in or on used furniture, appliances, bags, backpacks, clothes, or shoes, and have been known to infest vehicles as well. Even though keeping a clean house helps reduce the potential for cockroach infestation, German Cockroaches don't need much food and water to survive; your home doesn't have to be dirty for them to survive. They can fit in cracks as thin as a dime, and one roach can survive on the glue on the back of a postage stamp for almost a month!

German Cockroaches can have a significant impact on the health of your household. Pathogens can be carried on their spiny legs and on the sticky pads of their feet. They themselves can be infected with harmful disease-carrying pathogens, which can be transmitted when they contaminate food or various surfaces in the home or business with their feces and defensive secretions. German Cockroach droppings, body parts, and their defensive secretions can cause allergic responses ranging from mild to severe, and are known to be a cause of asthma.  In cases of heavy infestation, they have been reported to bite people and eat the food residues off the face of a sleeping human. Cockroaches have been documented feeding on toenails, eyelashes, eyebrows, and the hair of people while they sleep. They can cause large amounts of psychological stress, and the stigma associated with a German Cockroach infestation can change human behavior. People with infested homes do less entertaining of guests, and may avoid the kitchen at night because they don't want to see a cockroach. 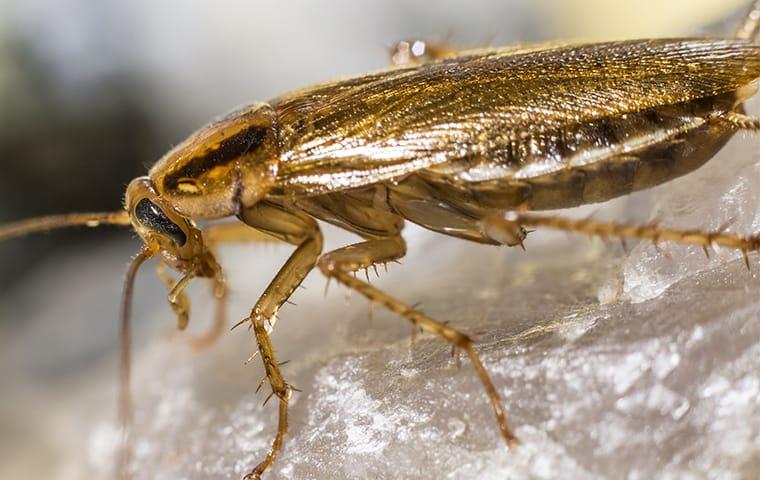 How We Control German Cockroaches

German Cockroaches reproduce very quickly. They grow from an egg to a reproductive adult on average in 50 to 60 days. Once fertilized, a female German Cockroach develops an ootheca (egg case) with 18 to 50 eggs (~32 on average). At room temperature, one egg case is produced about every 6 weeks. After hatching, German Cockroach nymphs primarily feed on the droppings, secretions and shed exoskeletons from other cockroaches. German Cockroaches prefer confined spaces, and often hide in places that are easy to miss.

Since survival of just a few eggs is enough to allow an entire population of cockroaches to bounce back, and the threat of re-infestation from surrounding areas can be high, control measures have to be thorough, systematic, and repeated. Here is what we do during each Cockroach Control Service:

Flush Them Out: Because German Cockroaches prefer confined spaces, it is important to direct control efforts towards the spots where they are most likely to hide. We inject a powder into the voids, cracks, and crevices they are likely to be hiding in. This typically causes the cockroaches to flee their hiding spots; if you didn't know how many cockroaches you had, you may be surprised! Typically, 80% of the German Cockroach population is made up of nymphs at any given time.

Targeted Gel Bait Placements: The youngest German Cockroach nymphs feed almost exclusively on the droppings of larger cockroach nymphs and adults. At Miche Pest Control, bait placements are an essential part of our cockroach control programs, so we can achieve a "domino" effect: with the right baits, we are able to achieve control of cockroach nymphs and adults, as the bait passes through the digestive tract of the adult, then is fed on by the nymph. Proper size and placement of the bait is crucial in maximizing the acceptance of the bait by hungry cockroaches.

Follow Up: Most of our customers with cockroaches have the service done once per month, until the cockroaches are gone, then have the service maintained on a quarterly basis to help prevent reinfestation. It is extremely important that you listen to the recommendations from your technician, to maximize the effects of each service and help gain quick control of the cockroach population.

If you are having issues with German Cockroaches, let Miche Pest Control's experienced team of technicians help you protect your family. Schedule your cockroach control service today! If you're not sure whether or not you're dealing with German Cockroaches, schedule a free inspection for your home or business in DC, Northern Virginia, or Maryland by contacting Miche Pest Control today!